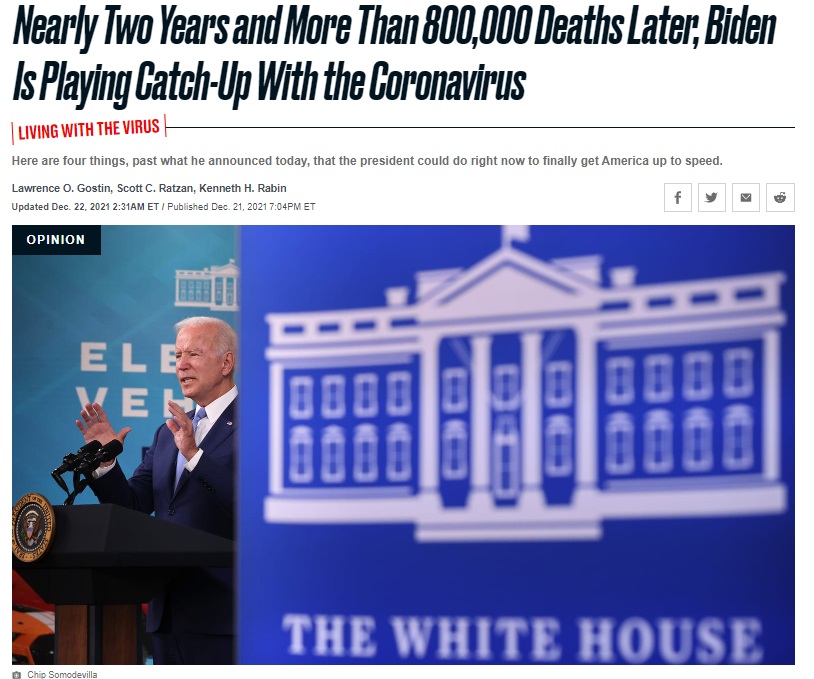 BP2C Executive Director Dr. Scott C. Ratzan, Lawrence O. Gostin and Kenneth H. Rabin wrote an Opinion in The Daily Beast on December 22, 2021 titled, “Nearly Two Years and More Than 800,000 Deaths Later, Biden is Playing Catch Up With the Coronavirus,” with a byline “Here are four things, past what he announced today, that the president could do right now to finally get America up to speed.” The full article is available here on the Daily Beast website and is copied below.

President Biden today warned the nation of a dark winter, fueled by the Omicron variant that is now dominant in America. He will expand testing sites, distribute free at-home tests, and deploy federal resources to overwhelmed hospitals.

The president staked his political reputation on stemming the COVID-19 pandemic. Yet, roughly half of the 800,000 deaths have occurred on his watch. The U.S. is on track to exceed 1 million COVID-19 deaths, the world’s highest death toll.

How will a nation that is already demoralized, divided, and desensitized react to these latest fear messages? Just three weeks ago, on Dec. 2, Biden announced a nine-point plan, declaring that “this is the moment we can put the divisiveness behind us.” Yet, here we are again, with a couple more fixes and the pandemic’s end nowhere in sight.

The president faces huge headwinds. His earnestness is undercut by confused and ineffective messaging, including the vice president saying, implausibly, that the White House had no idea Omicron was coming; a widely admired chief science advisor who has been compromised by raw partisanship and over-exposure; and a CDC that seems to change guidance at every turn. Overall, an exhausted public is asking, Why trust the experts when the virus just keeps roaring back?

A long list of policy failures has gotten us to this point. Let’s start with testing. Remember when the CDC sent out faulty test kits early on, and it took a week to get test results? Now, two years into the pandemic, it’s truly sad the average person can’t get an affordable rapid test. Recently, Biden announced rapid at home testing would be covered by private insurance, but that still hasn’t happened. It makes no sense to require people to fork out for the test and then seek reimbursement. The uninsured and Medicaid or Medicare recipients can’t even get reimbursement.

That’s why the administration played catch-up today, promising to deliver a half-billion free rapid tests to homes next month. Federal testing sites will be established nationwide. That’s not bad, but we’re still far behind peer nations, where rapid tests are widely available in pharmacies, grocery stores, and doctors’ offices.

It’s also good that Biden’s expanding test sites. Yesterday, Mayor Muriel Bowser urged D.C. residents to buy rapid testing kits to avoid long lines at testing sites. What’s wrong with this picture? It’s unreasonable to ask a person to risk getting COVID-19 while waiting in a crowd to be tested. It’s equally unreasonable to expect the average person to fork out $26 for a couple of tests.

Soon the FDA will authorize a transformative at-home antiviral pill that cuts hospitalizations among at-risk adults by 89 percent. When that day comes, rapid testing becomes indispensable. Without a rapid home test, it’s nearly impossible to access the pill within three to five days after symptoms arise, as clinically indicated.

But here’s the worse part—the pill won’t be widely available for months due to supply shortages—reminiscent of the excruciating vaccine shortages last spring. The administration should ensure sufficient supply for all at-risk adults (a full treatment requires 30 tablets over five days). We should also facilitate distribution globally.

We’re naming variants like hurricanes but using Aristotle’s Greek alphabet. Yet CDC isn’t tracking cases with the technical precision the Weather Service tracks storms named Bob and Anna. CDC’s patchwork disease reporting system was upgraded last month, but without good surveillance from abroad, we’d be pretty much flying blind. The Omicron variant will cause an avalanche of infections among the vaccinated, but CDC isn’t tracking breakthrough infections at all. And speaking of fully vaccinated, that should now be defined as having a booster dose.

We still have a few good tools that are being under-utilized, along with some others that have little utility. Cloth masks should give way to N95 ventilators, for example, and plastic shields are not particularly useful. Here’s a list of important tools within the president’s disposal.

First, Biden should use the Defense Production Act to end supply shortages, including for test kits, N95 masks, and effective treatments.

Second, the administration can make travel safer, especially during the holidays. The president should require proof of vaccination for interstate travel. Unvaccinated Canadians cannot fly domestically; why can Americans? Biden recently required a negative SARS-CoV-2 test 24 hours before boarding a flight to the US. Transportation Secretary Pete Buttigieg could make domestic travel much safer by requiring a similar standard of testing and vaccination.

Third, the administration should create a secure and confidential national vaccination credential. It can’t be avoided any longer. Europe has mastered the technology. The Department of Homeland Security, with CDC, could issue technical guidance for cities and states to roll out vaccine passports in 2022.

Fourth, let’s get serious about vaccinating the world. It’s in our national interests to prevent future variants. Biden made a bold pledge to vaccinate 70 percent of the global population by September. Samantha Powers, the USAID Administrator, should be tasked to bring the global pandemic under control, with the same sense of purpose as PEPFAR—the audacious global AIDS program.

The president has taken lockdowns and school closures off the table. He’s right. We can’t afford to shutter the economy and rob our children of a quality education. These tools also don’t work. Yes, lockdowns and school closures temporarily slow transmission. But each time the economy opens back up, the virus surges. We can’t keep repeating the cycle of closing and opening society two years into the pandemic.

It’s time to find a way to live with the virus. That means keeping people from getting sick, going to hospital, and dying. The best way is full vaccination; home tests; and good treatments. It’s the president’s job to provide the tools: vaccine credentials and passports, rapid test kits, and ample supplies of antiviral medications and vaccines. That’s a good social contract we can sign for the New Year: Our government resolves to provide the tools, while individuals take responsibility to keep themselves, and their families, safe.