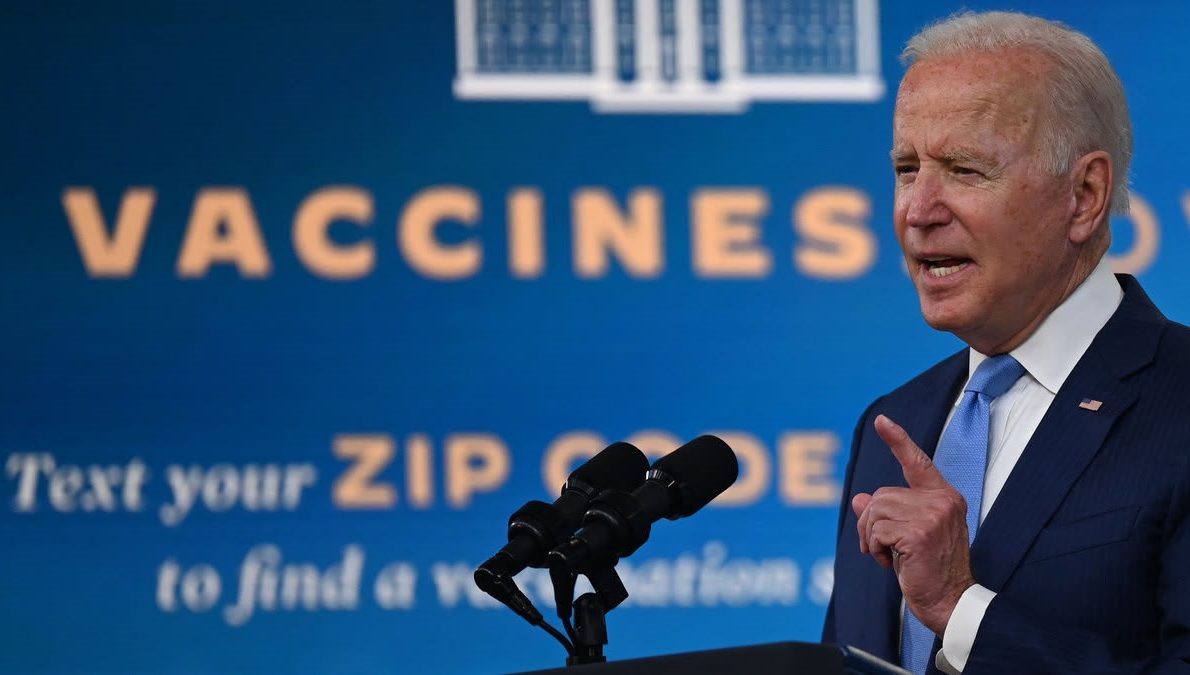 The Daily Beast published an op-ed by BP2C Executive Director Dr. Scott Ratzan, as well as Lawrence O. Gostin and Kenneth H. Rabin on November 4 titled, “Biden’s Workplace Vaccine Mandate Is Legal, Moral, and Wise,” in which they write that the levels of divisiveness and rancor over vaccinations and mandates that we are seeing now are higher than ever, but that the law, ethics, and public health are all on Biden’s side. Read the full article below.

President Biden will put his war on COVID-19 and the reputation of his presidency on the line when the Occupational Safety and Health Administration (OSHA) releases a Temporary Emergency Standard requiring all large businesses to mandate vaccinations or regular testing among all their employees. The FDA also just authorized, and the CDC recommended, pediatric vaccines for children ages 5 to 11, triggering a massive push to vaccinate all school children.

Biden’s actions will expand the base of 190 million Americans who have already received at least one COVID-19 vaccine dose by tens of millions of unvaccinated workers and 28 million grade school children. All told, this should bring us much closer towards the community protection levels needed to get control of the pandemic—and get everyone back to normal.

Biden’s mandates, however, could also rend our social fabric beyond mending. Vaccine and mandate opponents are taking to the streets and to the courts, claiming they are fighting for liberty, protecting our bodies against untested chemicals, preserving the sanctity of the family, and putting people ahead of scientific experimentation. Many refusals are in the name of freedom of religion, which plays an outsized role in our culture and Constitutional traditions. Today’s anti-vaccination movement has real money, organizational savvy, and a fair amount of star power behind it—even if it is dead wrong on the science and deeply destructive of the nation’s health and economic prosperity.

The law, ethics, and public health are all squarely on Biden’s side here. But first, let’s review what OSHA will actually require. The new rule will apply only to businesses with 100 or more employees. Biden could have gone further because most of OSHA’s safety standards apply to all covered workplaces irrespective of size. But he chose to exempt small businesses, which leaves a gap in worker vaccine coverage. We don’t expect OSHA to frame its rule as a vaccine mandate, but rather a requirement to prevent the spread of the highly infectious Delta variant in the workplace. The best way to do that is through a fully vaccinated workforce, but workers who refuse would have to be regularly tested (and, ideally, masked and distanced). It shouldn’t apply to those who pose no workplace risk, such as employees who are working fully remotely. Importantly, OSHA will require businesses to pay for leave time for employees to get the jab and for any recovery time due to adverse effects.

One hot-button issue is, who will pay for testing? We believe employers should because they have the duty to maintain safe working conditions. There is also the concern about equity because having employees pay for testing would particularly burden poor and minority workers. But many businesses will shift the cost to workers who refuse to be vaccinated. That will be another incentive to just get the jab.

OSHA will certainly allow valid medical exemptions for vaccine mandates, and most probably religious exemptions as well. Employers should make every effort to ensure that requests for exemptions are sincere and justified. For workers who are granted an exemption, they will still be required to undergo regular testing.

Many workers and businesses are asking, how will OSHA enforce its new rule? While OSHA is short-staffed (with 2,400 inspectors covering 8 million workplaces), it will effectively enforce the new rule. Most businesses simply comply immediately, and many have already mandated vaccines or testing. OSHA could ask companies to keep records and report on their compliance. OSHA inspectors can arrive without advance notice. And workers can trigger an inspection by alerting the agency that their employer is not complying with the new COVID-19 rule. The law protects employee whistleblowers. Fines for noncompliance are modest, less than $14,000, but they can accumulate per violation.

We know already there will be an avalanche of legal challenges. Republican governors, for example, are already lining up to bring lawsuits, hyperbolically claiming that the business mandate is an overreach, authoritarian, and unconstitutional. It is none of those things. In fact, Biden is acting at the very height of his presidential powers. He’s not acting unilaterally, but with the express authorization of Congress. In 1970, Congress enacted the Occupational Safety and Health Act directly in response to a patchwork of weak state worker safety standards. Signed into law by President Richard Nixon, the Act empowered the Department of Labor to set uniform national workplace safety standards, including emergency temporary standards in response to workplace hazards.

About 11 states such as Florida and Texas ban vaccine or mask mandates, but under the Constitution’s Supremacy Clause, federal mandates trump anti-vax laws at the state level.

OSHA’s new mandate builds on U.S. Equal Employment Opportunity Commission and Department of Justice guidance that COVID-19 vaccine mandates for workers are entirely lawful. Employers also should provide employees and their family members with information to educate them about COVID-19 vaccines and raise awareness about their benefits.

The concept of a “vaccine mandate” triggers resistance among many in part because of the word itself, which evolved from the Latin mandatum, an authoritative command in Roman law. But for all the vocal reaction to mandates, today’s COVID-19 vaccination mandates seem to be working. Employees in organizations that have already instituted vaccine mandates are not leaving in droves. Public opinion surveys consistently report that most Americans support vaccinations as a condition of returning to work. They prefer to shop, eat, and attend public events at places with published safety standards and verification schemes—QR codes, certificates, vaccine passes—that confirm the vaccination or negative test status of employees and customers alike.

Requiring vaccination is not foreign to the US but has been part of our lives at least since the mid-19th century. The Supreme Court has twice upheld vaccine mandates. And recently, the Supreme Court let stand a vaccine mandate at Indiana University and another one for health workers in Maine. Maine did not even offer a religious exemption, and the court let the law stand. It may be too soon to mandate COVID-19 vaccinations as a condition of school entry, but the day will come when the FDA grants full licensure to pediatric COVID-19 vaccines.

In short, the legal framework supporting vaccine mandates is robust. But the fact remains that we have never as a society faced the levels of divisiveness and rancor over vaccinations and mandates as we are seeing right now.

We cannot predict whether historians will rate President Biden’s vaccine mandates as a Profile in Courage, but to use another Latin phrase, Alea iacta est (“The die is cast”).